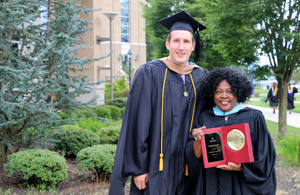 Misericordia University welcomed 418 first-year students during the annual convocation ceremony on Aug. 22 in the Wells Fargo Amphitheater. The students were led into the ceremony by a contingent of bagpipers and members of the staff and faculty who were attired in academic robes for the occasion. The event welcomes first-year students and their families to Misericordia University, and acts as the official start to the new academic year. Orientation began later in the afternoon and continues until the first day of classes on Monday, Aug. 26.

Misericordia University received 1,766 applications for the first-year class, which hails from 10 states, including Connecticut, Delaware, Maryland, Massachusetts, New Hampshire, New Jersey, New York, Pennsylvania, Vermont and Virginia. They hold an average high school grade point average of 3.4 with an average SAT score of 1134 and 24 on the ACTs.

The university also welcomed more than 50 transfer students. Misericordia has 847 students scheduled to live in residence halls and townhomes on campus. 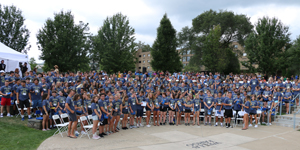 The convocation program included a welcome by President Thomas J. Botzman, Ph.D., a blessing by Monsignor John Bendick, and an address by Misericordia alumna Vera Cornish '93, president of Cornish & Associates Inc. and recognized author, publisher and life empowerment strategist. During the convocation ceremony, Misericordia University Alumni Board President Adam Grzech '13 '17 presented Cornish with the Mother Mary Catherine McGann Achievement Award. The alumni award is given in recognition of distinguished and sustained career accomplishments.

Cornish is publisher of The Urban Connection, a lifestyle publication that focuses on the delivery of information to diverse markets. She most recently authored the book, "Dare to Dream," chronicling her journey from humble beginnings in Pittsburgh to community leader and president of her own company in the state's capitol. 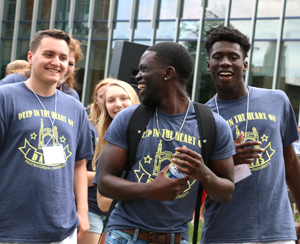 Raised by her grandmother, she is the first member of her family to graduate from high school, attain a baccalaureate degree, earn a master's degree, and serve as owner or president of a business. During her address, Cornish encouraged students to embrace the decision they made to attend Misericordia University and make the most of it.

"Take complete ownership (of your decision.) Embrace the world of academia. Your time on this campus can be the adventure of a lifetime, enjoy it," Cornish stated. "Be open to everything Misericordia has to offer."

She offered a list of lessons she learned as she overcame obstacles to earn her academic degrees and successfully develop her own highly regarded business. The lessons include: "Build relationships with great people. Some will be for a season. Some will last a lifetime;" "Let your yes be your yes, and your no be your no. Stay in integrity," and "Understand there is power in perseverance - perseverance develops character."

Lastly, she added, "Today, know the mission of Misericordia and the core values (Mercy, Service, Justice and Hospitality) of this incredible university. Ask yourself, are you in alignment?" 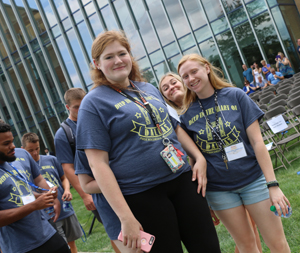 A Pittsburgh native, Cornish grew up in Wilkes-Barre and earned a bachelor's degree in education of the exceptional child from Penn State University. As a full-time adult student at Misericordia University, she received her master's degree in education, specializing in multi-cultural curriculum development. She launched her career in multi-cultural diversity, working first for Penn State University, and then as the first director of Institutional Diversity at Harrisburg Area Community College.

Misericordia's first-year resident students arrived on campus earlier in the day and moved into their residence halls with the help of a team of orientation leaders, who trained throughout the summer to direct the move-in efforts. They were assisted by members of the faculty, staff, athletic teams and alumni association. Or visit our social media mashup page for a snapshot of our recent activity!